Clocking up 50 years is gold for Barry

Home Clocking up 50 years is gold for Barry

Many people these days are working well past what used to be considered the age of retirement. Some decide to continue working because they need the money. Others, like 78-year-old truck refueller Barry Gray, love what they do and can't imagine not doing it anymore.

For Barry, it seems retirement is a dirty word. He continues to work six days a week at Illawarra-based industrial and recycling firm SCE, just like he has for the last 50 years. And has no plans to clock off just yet.

“I moved to the Illawarra from the North Coast for six months in 1964 and never looked back,” Barry says.

After plying his trade for a few different contractors in the 60s, he started working for SCE in 1970, then known as South Coast Equipment, developing a healthy respect for founder Paul Newman.

“I just felt there was a better future here. I got on very well with Paul Newman. Sometimes he would come out and fill up and have a talk to me and ask me about a project when he was chasing work and if we could do this or that. 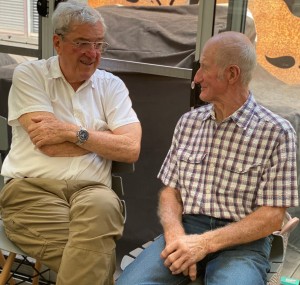 Paul and Barry catch up on old times

“He’d go away and think about it. I don’t know if I had anything to input into it, but he’d put in for a job around the Steelworks and mostly got whatever he was chasing.”

“Other times he’d be in here on weekends, Paul used to do his weekend on too, doing his own work.

“But every so often he’d drive around the works and he’d see me out there filling a loader; he’d pull up and say, “We’ve had a good day today,” and would tell you he was happy with what you’ve done.”

This personal approach has been one of the main reasons Barry has stayed all these years, treated as if he was part of the family.

It wasn’t a conscious decision; Barry says he just continued working because he enjoys the job and camaraderie with his co-workers.

“I’ve also got work satisfaction. It was a lot of hard work back in the early days when you were draining oil into drums, laying under machines, undoing plugs and oil came pouring out.

“You had to get the plug back in, drag the drum out, and empty the oil into another drum,” he recalls. “Whereas these days we’ve got the evac system. You just plug your hose on, and it sucks it into the waste oil.

“It’s a lot easier more efficient and quicker. But that’s how we had to do it back in those days.”

Somewhat of a quiet achiever, he wasn’t all that fussed with the recent fanfare at a morning tea to celebrate his 50th work anniversary, taking it all in his stride. Like the day he was greeted by three generations of the Newman family on the same day.

“If Paul sees me, he always comes out and says hello and shakes my hand but on this day Robbie (Paul’s son Robert) also came over then Fred (Robert’s son) was walking through he came out and shook hands. 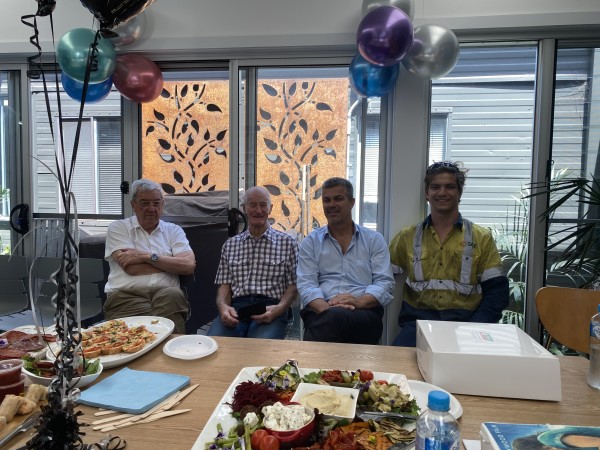 Changing with the times

While he has seen and survived plenty of changes in the workforce over the years Barry admits he was slow to adopt new technology.

“We’ve got a DataFill system set up on the truck for the loaders. You’ve got to punch some data in, including the hours, and that will start the pump up, otherwise, you can’t get fuel. 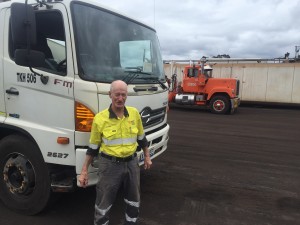 Barry prepares for another refuelling run

“When I first started, you’d just fill up and that was it. You didn’t worry about how much fuel was being used. Then we had to start to write everything down.

“[Laughs] The DataFill was in store for about three years before we started using it, but it was good once you got used to it.”

Barry is all too aware he will have to stop work sometime, admitting his body clock is starting to catch up on him, with a few aches and pains taking longer to settle now compared to his younger years.

“I’m not sure when I’ll retire. I was only just thinking about it the other day. I have holidays coming up in June so I will have a think about it then.”

As for his retirement plans, picking up an old hobby and spending more time with his adult children and their families could be on the cards.

“I used to do a lot of fishing with a couple of guys who both had boats. We’d go down the coast, stay in cabins and go out fishing every day, weather permitting, and divide the fish we caught at the end.

“Maybe do a few jobs around the home but they’re not going to last forever I realise that.”

He’s already had a mishap with a ladder after helping his neighbour fix a few loose roof tiles.

“I put the ladder up and it felt safe, I always make sure. Anyway, I was climbing up and it slipped and down I went.

“I finished up with skin off my nose and a couple of black eyes after coming off second best with the concrete pavement below.

“Somethings I suppose when you get older, like climbing up ladders, you’ve got to be a bit careful.

“But I got back and finished off the job. After that, I’m a bit warier.”

One thing is for sure, Barry won’t remain idle for too long when he finally decides to call it quits.

Posted 2 years ago 6 Minute(s) to read