Women in the driver's seat

Home Women in the driver's seat

Women encroaching on previously male-dominated territory is nothing new but until recently the truckie space seemed sacred.

Belinda Green is a grandmother with almost 20 years’ experience in the industrial services industry, the last six driving for SCE. She has a hunger for learning and loves her power tools.

Ilana Strachan was a retail assistant just 12 months ago. Always enjoyed driving but never saw herself as a truck driver. That is, until an opportunity presented itself to become, as she describes, a ‘steering wheel attendant’.

They drive purpose-built Volvo 30 tonne 8-wheeler trucks to haul materials for BlueScope and South32 inside the Port Kembla Steelworks.

Working day or night shift, on sealed and unsealed roads, tipping on stockpiles or in road hoppers these inspiring women, and others like them, are helping break down perceptions of the stereotypical male-dominated truckie in the transport industry.

How long have you been driving trucks for SCE?

Belinda: Six years. I’ve mainly been on trucks in that time but in the last two years I’ve got into the front-end loaders and acquired my excavators’ ticket so I’m looking to learn it all.

Ilana: I started about three months ago. And, at the moment, I’m just driving the trucks around.

When did you first step into a cab to take hold of the wheel?

Belinda: I’ve been working in the steelworks since 1994, driving the industrial cleaning trucks, vacuum loaders and high-pressure water blasters and continued from that. Now, I couldn’t see myself doing anything else. I always wanted to be a plant operator or truck driver.

Ilana: I’ve always enjoyed driving but never really thought of being a truck driver but last year I had an opportunity presented to me to have my licence paid for and thought, ‘Why not? I’ll give it a shot.’ I’m pleased I did because it’s the best job I’ve ever had. I wouldn’t go back to anything else.

Most people’s perception of the average truckie is male. Is it a still a bloke’s world?

Belinda: It was tough when I first started but it was like water off a duck back. I was the youngest of five and was always interested in what my brothers were doing as opposed to my sisters [Laughs].

I also knew what I wanted and knew where the money was. It was a male dominated workforce when I started but eventually, I became ‘one of the boys’ so to speak.

I’ve always had a personality that allows me to get along with anyone. My dad always said, ‘If someone stands on your toes you stand on theirs harder. That’s how it was back then, and they learnt to respect you for that. I do my job and I do it to the best of my ability. I’m getting paid the same as everyone else, so I’m prepared to put it in the hard work just like the guys.

Ilana: I guess I’ve found it a little easier having only got into it a year ago, especially in the program I came through as they were encouraging female drivers. I attended a three-month classroom course learning the theory side of driving trucks then I went with a driving training company to teach me how to drive trucks, get competent and get my licence. So, I’ve had a bit more of a leg up than Belinda.

So, what does a typical day look like for you?

Belinda: Driving around and around in circles [Laughs]. No seriously, always wanting to keep on track, making sure the job is right for the next person that comes on. Making sure the truck’s right. It’s a pretty good job.

What do you do to keep your mind on the job?

Belinda: We have a variety of things to do. We are not on the same track all the time. You take one day at a time. There’s always an opportunity to be put on a new job or learn a new task.

Ilana: It also helps that we generally have a friendly workforce. The majority of people you deal with are easy to get on with which makes the day flow a bit easier.

What is your favourite thing about being a truck driver?

Belinda: It doesn’t take a rocket scientist to drive a truck [Laughs].

Ilana: I came from retail so it’s good not having to deal with customers! You are by yourself and can chill out.

Belinda: You can go your own pace, operate new equipment learning that part of it and as time goes on, we’ll keep broadening our horizons and learn whatever we can.

What’s the best advice you’ve been given?

Belinda: When I first started here the guys used to say there’s no race, take your time. I get where they are coming from. It’s safer and easier on the equipment.

Ilana: Focus on what you are doing. Listen to other people but then make your own judgement.

Belinda: Everyone is different but once you jump in a truck on your own you work out what is best for you but still take everyone’s advice as they have the experience. 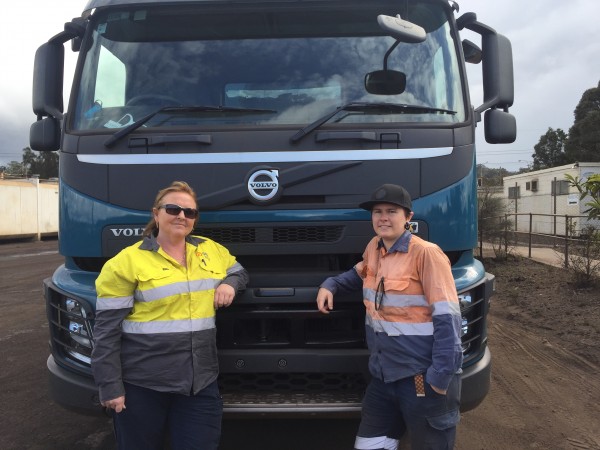 How do juggle work/life balance with shift work?

Belinda: If I am at home or at work, I like to be busy. I just go, go, go. I’m a grandmother and look after my grandson every second week. I’m also single so the house is maintained by me and I have my kids still living there… they must have a good deal because they won’t leave!

Ilana: I’m a casual so it’s a little a harder than when you are working full time. My work pattern changes on a day to day basis so it’s hard to make plans around that. If I want to make plans outside of work, I have to let work know I’m not available, which I don’t like doing.

Belinda: Yes, it is harder for Ilana because she might get a call at 1pm asking if she can start at 3pm. And then be told you are doing a double. I like building stuff doing carpentry and gardening projects around the house. I get excited with new tools and I like being hands on. But sometimes it’s also nice to get away from home!

Ilana: Yes, not knowing if I am working on a given day is hard. I ask myself sometimes ‘Should I sleep in or should I get up now?’ but if I do have a day off, I try and catch up with friends, go to gigs, a bushwalk or the beach.

What’s the most unexpected thing you’ve seen as a truck driver?

Ilana: [Laughs] Yeah, you’re always being watched. I’ve seen a few idiots on the highway when I was driving for a previous company. They think they can beat you because you are female but in any given situation a truck is always going to win.

Belinda: Whatever goes. Whatever is playing. And you can sing!

Ilana: [Laughs] Yeah, I definitely do a lot of that. And no-one can hear you.

Belinda: Well I hope not!

Ilana: I sometimes have to check the radio is not on.

Belinda: If it ever is, I know they won’t be listening to me for long [Laughs].

Finally, do you have any advice for other women looking for a career as a truck driver?

Belinda: I would encourage more women to get into this line of work, it’s not hard if you can drive because most of our trucks are automatic. There’s no difficulty in it. It’s just being able to judge and getting around things.

Ilana: There’s no difference apart from getting used to the size of the trucks. It’s like anything, practice makes perfect…you don’t know until you have a go.

Belinda: You can do anything you like if you put your mind to it.

Posted 3 years ago 7 Minute(s) to read